These are the notes I wrote for adding and subtracting rational expressions last year in Algebra 2.

On the first page, I wanted to make the connection between rational expressions and fractions explicit, so I started with a reminder of how to add and subtract fractions. The two examples were chosen deliberately; the first only required changing the denominator on one fraction, while the other required changing both denominators. Students need to deal with both types of problems with rational expressions.

The next part introduced two simple problems, with only one denominator being changed between them. They are both problems that require simplifying, as I wanted to emphasize the need to do this from the start. (Students had already seen how to simplify rational expressions and stating excluded values.)

The next page was about finding the lowest common multiple. I had students use a strategy which emphasizes the definition of the LCM, having them multiply by factors so that the two expressions are the same.

And finally, a couple of examples putting all of this together.

I’m becoming a student again this fall. As I’m preparing for that, I’ve been reading through some of the textbooks for the classes I’m taking, which has got me thinking about how we use the word “range”.

To highlight the problem, I posted this poll on twitter last week:

The correct answer to this question is… well, there isn’t one. It is a (deliberately) bad question because the meaning of “range” is unclear.

The question I was really asking was “Does the word ‘range’ refer to the image, or to the codomain, of a function?” And while most said that it refers to the image (which is what I would’ve said, prior to thinking about this), 15% chose the codomain. 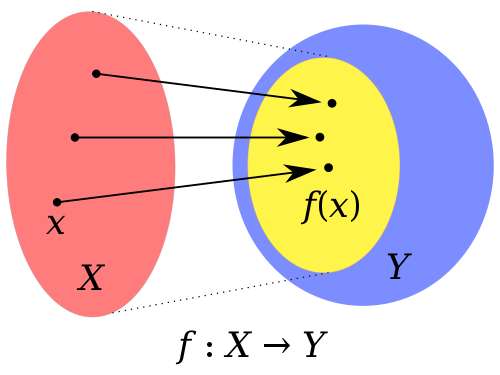 The problem is illustrated really well by this image from Wikipedia. The is domain is red, the codomain is blue, and image is yellow. But the range is either yellow or blue, depending on context. According to my poll, and the limited research of high school standards I’ve done, most would say yellow. But definitely not all agree with that.

That Topology book that I mentioned earlier uses the term “range” to refer to the codomain, and uses “image set” for the image. But, there is also a footnote stating,

Analysts are apt to use the word “range” to denote what we have called the “image set” of f. They avoid giving [the other set] a name.

Maybe the 20 people who all voted for ℝ were all topologists? Probably not. But, it shows that different people have different assumptions about what the range of a function means.

With all of this confusion around the meaning of the word, how are high school students supposed to understand what the range is? One solution would be to get rid of the word altogether. The words image and codomain already describe the two sets without any ambiguity, so we can just use those instead, right? We just need to define the two terms clearly, and the confusion in our classrooms will be significantly reduced.

Alas, students are still going to come across the range, whether that’s in a textbook, on a standardized test, or in their next class with another teacher. But there’s somewhere else we can turn for guidance. I’m a strong believer in the idea that whatever academic standards apply to your jurisdiction, you should follow them, regardless of your opinion of those standards. So if your standards use the word range, your class should too. I took a look at a few different standards to examine how they suggest the terminology of functions should be used.

Common Core is a bit of a disappointment here. The glossary does not define range, domain or even function. The standard CCSS.Math.Content.HSF.IF.A.1 states that a function “assigns to each element of the domain exactly one element of the range.” Which is an accurate description of a function, but it’s unclear if the range here refers to the image or the codomain.

Oklahoma (where I’ve taught most recently) defines the range in the context of relations, rather than functions: “The set of all the second elements or y-coordinates of a relation is called the range.” Now, this is not how I would’ve written this definition, but it is something we can work with. By this definition, the only values in the range are those that have a matching value in the domain, meaning the range is identical to image. If I were teaching high school classes again this year, I would teach the range as I have previously, but I’d also take the time to define the codomain as well.

The Australian Curriculum gives a nice, clear definition of the range, which matches the image, as well as defining the codomain, in the glossary for Mathematical Methods, under the heading “Function”. I don’t remember teaching the codomain explicitly when I last taught in Australia. Perhaps I should have.

Regardless of where you are, I’d argue that it’s important to define the range very clearly, according to your location’s standards. But also define codomain or image, depending on how range is defined.

The point I’m trying to make is this: As math teachers, we need to constantly examine the terminology we introduce to our students. Because sometimes we might not be being as precise as we could be. If you want your students to be really clear on the meaning of mathematical terms, make sure you are first.

Summer means I have lots of free time to work on my book! Well, sort of. We’re in the middle of getting ready to move, so that’s taking up most of our time. But, there is more free time than normal, so I have managed to make some progress.

The major change is the addition of chapter 1, which is about the fundamentals of functions, with a particular focus on transformations. The only standard parent functions dealt with here are linear and absolute value functions, as this is an introduction to the principles that will be used with other functions in the following chapters.

I’ve rearranged some of the chapters in this revision, so the numbering is a little different than version 0.1.1 (that’s why I bumped up the minor version number.)

I am hoping that I will have chapter 2 written in the next few weeks, which will introduce quadratic and cubic functions.

These are early drafts of what is very much a work in progress. All content is subject to change.

Copyright Shaun Carter © 2018. Teachers may reproduce these documents for use in their own classroom only.

Today was our last day at Drumright High School.

Sarah and I have decided that now is right time to move on to new opportunities, with the added benefit of being closer to her family. Sarah has shared what her plans are, but I thought I should write this post to explain what I’m going to be up to.

I’ve decided that if I’m going to go to grad school, now is the time to do it. Rather than study education like Sarah did, I want to study more math. I’ll be working towards my M.S. in Applied Mathematics at the University of Tulsa. I’m really excited about being at TU, not just because of the convenient geography of being in Tulsa. Since I’ve moved here, I’ve been regularly attending the math teacher’s circle hosted by the TU math department, so I’ve already met a number of the faculty. Also, Sarah was a student there, too.

I’m not stepping away from education completely, as I’ve been awarded a teaching assistantship. I’m not entirely sure what my responsibilities will be yet, but I’m happy that I’ll get to keep teaching while furthering my own study.

Whether it’s polygons in geometry, or under a curve in calculus, I have a favorite way to explore area in class: cut up shapes made of paper and glue them back together in a new way. This time, I’m applying the idea to visually prove the formula for the area of a circle.

If it isn’t clear, the parallelogram-ish shape was originally the same as the circle at the top of the page, but its sectors have been cut apart and glued into the alternating up-and-down pattern that’s shown.

I printed eight circles to a page, and cut them into four sections so that each student could have two of them. There have been past years where I’ve had students draw and cut out their own circles to do this activity, which has the nice side effect of showing that students with different sized circles still get the same result. However, I decided this year that it was more important to get students into the activity quickly, so I gave them the template to use. Also, the sized circles I used (the radius is 1.35 in) seem ideal for fitting in a composition notebook.

A few pointers on how to approach this lesson:

These notes include the formula for the area of a sector, but our justification of it is not included on this page. This post from a few years ago outlines how I like to introduce that concept.